You, darkness, that I come from
I love you more than all the fires that fence in the world,
for the fire makes a circle of light for everyone and then no one outside learns of you.
But the darkness pulls in everything-
shapes and fires, animals and myself,
how easily it gathers them!-
powers and people-
and it is possible a great presence is moving near me.
I have faith in nights.

The city of Kigali is built on a series of ridges, with the geography mirroring the relative affluence of the city’s districts.  Downtown, which is in the center of the city (wh 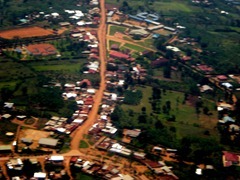 ere I’m sitting as I write this), is on one of the higher ridges (about 5k feet above sea level).  Mt. Kigali looms blue-brown in the distance and can be seen from most of the nicer neighborhoods.  The poor, shanty-like areas down between the ridges show the breadth of economic stratification here.  Still, it’s a pleasant place to be after the dust and entropy of Bujumbura.  The espresso is drinkable, which is a tremendous plus.

It’s raining today.  So instead of walking around like a muzungu fool, bothering people and taking pictures, I’ve found a quiet corner in an upstairs café where there is a great view of the distant hills.  In spite of its horrific history, Rwanda seems—at least in my

outsider’s perspective—to have worked hard on recovering.  The sense one gets in Kigali is similar to the nicer areas of Tijuana.  Yes, the streets are sometimes unpaved or broken; yes, the cars smell bad and the crows are noisy; but, all these urban characteristics are relative.  I imagine even the highest-maintenance North Americans, would find Kigali pleasant much of the time.

I’m enjoying my few days here before I return to Bujumbura.  And I can only hope that the political situation here does not degenerate.  People here, like people anywhere, are trying to lead their lives in peace, trying for something a little bit better.  Let it continue.