We know there’s a recurrent problem throughout this Administration: people who are chosen fundamentally for their utility as loyal Trump soldiers are usually not the most capable for running the country, especially if you take their previous careers into account.  They tend to be, in the most direct sense of the term, Trump apparatchiks at best—trustworthy and agreeable, if not capable, functionaries.

This is obvious.  And yet it’s likely going to be fodder for many history and government essay exams in the future (if we have a future): Explain the high level of attrition in the Trump Administration in terms of the President’s consolidation of power, presidential scandals, loyalty purges, and information control before and after the Mueller Report.  Mention how the Administration’s ideas about professional competency changed or stayed the same relative to the COVID-19 pandemic of 2020.

I can see the essay exam flop sweat breaking out behind the undergraduate personal protective face shields as they scribble away.  But no matter how clear or murky these interesting times become in retrospect, right now Mitch McConnell’s maneuvering makes him look like an apparatchick par excellence, who mistakenly thinks he’s nomenklatura.  Or, in non-Soviet terminology, a petty bureaucrat who thinks he’s part of the ruling elite.

In politics as in the game of chess, someone used primarily as a blocking piece is called a pawn.  And that’s what McConnell is in the career-warping aura of our very own Boss Tweed, who, for some reason most of us can’t clearly divine, is still President after a major corruption investigation and an impeachment.  Lots of pawns on the board these days, even if the king himself is beholden to other powers.  But COVID-19 might change that.

McConnell’s always been a game-savvy obstructionist.  In any field, some people are keyed in to the essential spirit of the thing, romantic visionaries who create new parts and reinvent others.  Then there are the classical proceduralists, the technicians who are far less dramatic but often just as effective as their visionary colleagues.

They are the apparatchiks who game the system, moneyballing their way from small victory to small victory, which, over time builds up to bigger things.  This is Mitch McConnell, whose efforts toward sabotaging Obama’s health care and banking reforms have become particularly legendary.

Unlike most of Trump’s people, McConnell is clearly intelligent and capable.  He does not come across as overly charismatic or even popular in his own state, but he writes well and is an avid student of history.  Unfortunately, he’s been drifting right for so long that he now appears incapable of bipartisan compromise.  It seems his unique technical skills as a creature of the Senate have become primarily useful to this Administration as a way to antagonize and obstruct the Democrats.

So I should not have felt shocked this morning when I opened the Times op-ed section and saw one by McConnell from 2019—one thinks, back in the feeds primarily in light of his recent, wildly ill-considered comments about letting states declare bankruptcy as opposed to providing them emergency funding—entitled, “Mitch McConnell: The Filibuster Plays a Crucial Role in Our Constitutional Order.”  The piece could have been subtitled: Honestly, what do the liberals expect?

McConnell writes “No Republican has any trouble imagining the laundry list of socialist policies that 51 Senate Democrats would happily inflict on Middle America in a filibuster-free Senate.”  And, given the hyperpartisan state of the nation, one must reluctantly agree.

At the same time, he exposes the central flaw in his argument when he invokes “founding tradition” in the voice of a procedural technician as opposed to someone creatively in line with the spirit of its aims and intentions:  “The legislative filibuster is directly downstream from our founding tradition. If that tradition frustrates the whims of those on the far left, it is their half-baked proposals and not the centuries-old wisdom that need retooling.”  This conveniently overlooks the fact that the filibuster was never intended to be used as a blunt, blatant tool of obstruction.

If McConnell wants to start talking “centuries-old wisdom,” he would do well to account for the broad scope of historical context instead of cherry picking his emphases.  As Alec MacGillis notes in The Cynic: the Political Education of Mitch McConnell,

In 2007, after Democrats reclaimed majorities in both chambers in 2006 and Mitch McConnell ascended to become his party’s leader in the Senate, the use of the filibuster soared. . . . By 2009, when the Democrats gained back the White House, the use of the filibuster spread, far more than ever before, to block presidential nominees of even the most pedestrian offices.  ‘The idea of a filibuster as the expression of a minority that felt so intensely that it would pull out all the stops to block something pushed by the majority went by the boards,’ wrote Orenstein, the congressional scholar at the American Enterprise Institute, in 2014.  ‘This was a pure tactic of obstruction, trying to use up as much of the Senate’s most precious commodity—time—as possible to screw up the majority’s agenda.’”

Operating primarily as a technical savant insensitive to the world beyond his procedural manoeuvring and its often harmful, lasting consequences, McConnell seems to lack the greatest benefit that accrues from reading history: an encompassing view that allows one to stop scrutinizing each tree and take in the shape of the forest.

In a stunning display of myopic partisanship that amounts to whataboutism, McConnell cautions us that “the Democratic Party is racing leftward, with presidential debates that make the 2008 exchanges between Barack Obama, Hillary Clinton and John Edwards look downright conservative by comparison. The party is rallying around the very kinds of radical schemes that the Constitution intentionally frustrates.”

If this is true, it must be equally true that there are some things the Constitution did not foresee, such as opportunistic rules pharisees willing to depart immediately from the broadminded spirit of the document at a moment’s advantage. 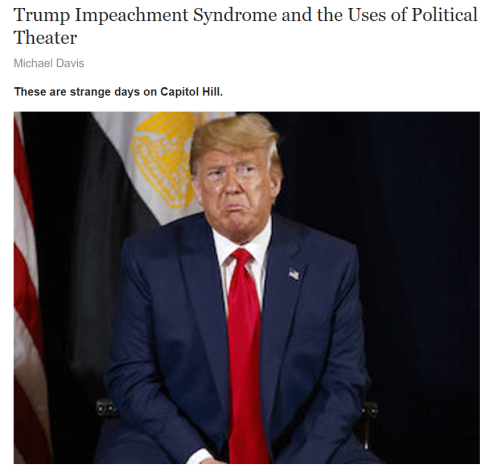 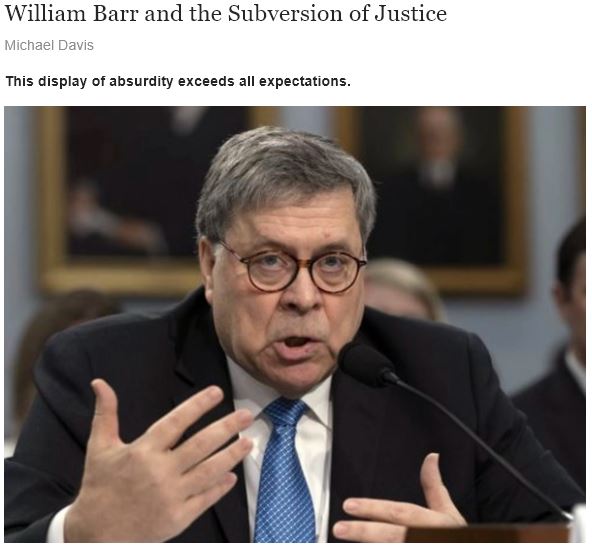 I have been reading about pro-Nazi exiles recruited and paid by the CIA. I can never read such things without feeling powerfully upset. But I also keep in mind Ludwig von Rochau’s idea that “the law of power governs the world of states just as the law of gravity governs the physical world.” Rochau supposedly coined the term, “realpolitik,” which originally had to do with achieving Enlightenment ideals in a world that didn’t operate according to those ideals. Reading about the CIA’s support of the Svoboda Party in the Ukraine led me back to Rochau, someone I haven’t thought about since my undergraduate years.

People seem shocked when they first learn that American Imperialism (like all imperialism no matter what costume it currently happens to be wearing) involves propping up murderous dictators, victimizing the weak, and destabilizing the social order of disobedient nations. Every nation that reaches a certain level of power becomes amoral. This is not to say it’s alright from an ethical standpoint. This is just the nature power politics–inherently pragmatic and opportunistic.

The inherent viciousness of such governments is held in check by two closely related things: the press and public opinion. Laws have nothing to do with it. Laws can be changed or ignored–as we see happening in the UK and the USA. But look at what has happened at the town hall meetings across the States. Those are a large part of what caused the lack of GOP support for Trumpcare. Fear of an angry mob gets things done in Congress, yessir.

Exposing a government’s essential Machiavellianism will not change the imperative for realpolitik in the world, but it can blunt the essential cruelty of decision makers, opening up a space for the weak and poor to evacuate to the hill country. Get grandpa dressed and fire up the sampan while there’s still time, why don’t you.

Picture an enormous rock rolling down the side of a mountain. The rock is moving in accordance with universal law. If you’re smart, you get out of the way. If you’re not so smart, you try to argue with gravity. I propose the wise course is to pay attention to what’s going on, know when to get out of the way, and live to read more books, complain about the murderers in power, and play with more kittens in your hut. Then maybe you can write political pieces on the inherent nastiness of the rulers and live to see them published.

Alternately, you can die for your beliefs. That is very heroic, but gravity will keep the boulders rolling down the mountains and there will always be bullets flying through the air. There will also always be empires and bloody strongmen and fools wearing crowns. It’s up to us to accuse them, argue for reform, and cast blame where it belongs. But we can’t do that face down in the canal.

And it’s alright to say, “But who will look after my cats?”