Absurdity Beyond All Expectations—Read My Latest on Splice Today . . .

Fed watching is a specifically peculiar pastime.  Specifically as in: if you take a specific interest in them, they will become specifically interested in you.  But it’s all good if you love the government.  And I do, as long as the government doesn’t try to love me too hard in return. Today, I became acutely aware that drifting by the J. Edgar Hoover Building one too many times might very well result in some hard federal lovin’.

It began, as all tragedies must, in ennui and idleness.  The Department of Justice wasn’t giving tours.  Their tourist entrance was dusty, dark, and shamefully unrenovated.  It looked like they hadn’t given a tour since 1980.  So I did what every good American tourist does when told, “no.”  I wandered around and took pictures of everything, looking completely lost and probably pathetic in my rumpled plaid shirt.

The truth is in there–in your file.

So I drifted.  I wandered.  I looked at monuments and listened to cathedral bells.  I observed the proper civic reverence at the Lincoln Memorial.  I wrote introspective things in my journal beside the reflecting pool.  I listened to a free lecture being given by a George Mason history professor outside the Smithsonian Information Center, the title of which might have been, “The Real Housewives of Colonial Washington.” (Tell me, sir, do you have tenure?)

I even went looking for a “spy museum” advertised on a blue sign with an arrow pointing off in the general area of the Washington Monument.  True to form, the spy museum could not be found (I should have consulted Google: “50 Years of Bond Villains” and I missed it).  But I discovered a way to enjoy myself nonetheless.  And, this being D.C., I also learned something.  In fact, I learned a lot.  I observed the domestic federal agent in his natural habitat.  And it was beautiful.

Tired and overheated, I’d made my way back downtown after standing with about 50 Japanese tourists in matching green T-shirts in the Lincoln Memorial.  We read the text of the Gettysburg Address aloud together from the wall and then we all clapped.  The middle-aged man standing next to me shook my hand.  We’d accomplished something together.  I felt proud and ashamed.  They did an excellent job reading the text, all things considered.  Could I do the same with the Sengo-Kenpo?  I think not. 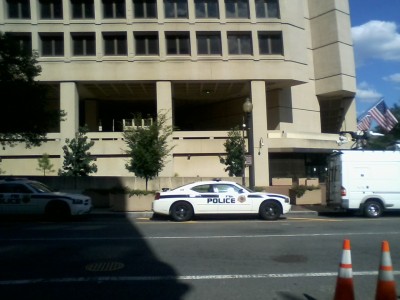 The FBI Police have all their own gear and a concrete fortress. Do NOT underestimate them.

In any case, I subsequently found myself back at the intersection where the DOJ kitty-corners the J. Edgar.  I arrived just in time to see a lanky southerner of clear conscience but dubious judgment get questioned and patted down by the FBI security police.  Apparently, he’d been standing there taking photos of the J. Edgar for some time.  What no one knew—or maybe no one cared as I am generally rumpled and clearly non-threatening—was that I had also taken one too many shots of the architecture.  Actually, I took more than just one too many.  You might say I took a veritable shitload of pictures.  And I have no doubt that the intelligence Death Star was taking pictures of me taking pictures since there was a little dome camera every 4 feet.  But still, Jethro got the hard love and I got a coffee—across the street.

I sat down and started to draft what wouldn’t become this post when I looked up at them coming right towards me—not the FBI leg breaker foot soldiers in white shirtsleeves and body armor, but an honest-to-goodness double Mulder.  At first, I thought of Jethro and that maybe he’d gotten off easy, maybe my hard lovin’ would be twice as intimate.  But they just sat at the table beside me, oblivious.  They looked extremely clean in their unwrinkled blue suits and good haircuts.  They looked, in fact, cinematic, unreal, pressed out of some Fed-mint calibrated to make them look more like movie FBI agents and less like humans with nose hair and occasional gas.

I looked down at my netbook (Kindle app: The Importance of Being Earnest, really) and jotted down their conversation as accurately as my writerly eavesdropping gifts would permit:

And then a long silence.  I wanted to give them both a big hug for being humans after all—for the nose hair that the Department of Justice must require them to clip, for obviously farting in secret and, in spite of their immaculate suits (which nevertheless looked a bit like Macy’s $150 off-the-rack specials), for being worried about heartbreak.

Lots of love in the J. Edgar Hoover Building. It’s obvious, no?

I walked away feeling sorry not for them but for Jethro, who will nod off on the plane back to Arkansas, wondering at the faceless tyranny of our federal government, at its omniscience and surveillance.  As far as I’m concerned, there’s more to this machine.  It’s built out of people.  And, as much as it can be a terrifying monster, it can fall in love just like you.  Just let it be the gentle kind.

I’m hitting that spy museum tomorrow, Moneypenny.  Damn it if I’m not.