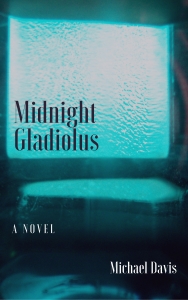 “Certain moments in life stay with you forever—even if they didn’t happen.” Friendly smiled behind a clump of kitsune udon. He held the noodles in front of his mouth with black chopsticks, making Donny think of worms in the beak of a crane. “Anyone can have an anomalous experience. The unenhanced hallucinate just as often. It doesn’t mean you actually met some magical gardener and had a life-changing experience.”

The noodle shop was named 白いカラス, Shiroi Karasu, White Crow. Its oversized mascot fluttered and refolded its wings, staring through the glass storefront at the rain. A thin silver chain ran from its leg around a dowel, which made a perch at the top of a wooden hat stand. The stand was very old, would have been a valued antique if long thin nails hadn’t been hammered into its top struts in order to keep the dowel in place.

“Is that what I am? Enhanced?”

Friendly slurped fat white noodles between his lips, grinning as he did it. Everything he did seemed easy, effortless, enjoyable. “Well, you’re just as special as everyone in the group. You’re also a product of our times. I still think you need a sponsor.”

“About your chip? Your old life?” He laughed and plucked a hunk of aburaage from his bowl. “Of course she did.”

The bird was synthetic. It didn’t need to be chained to its perch. It would never try to escape. But someone had decided that the silver chain was necessary to maintain the illusion. It turned its head and looked at Donny, blinked, then looked back out at people passing the restaurant. They kept their heads covered with slowly dissolving broadsheets, walking umbrellas, the sanitary hoods of cheap mylar ponchos one found in Venice Sector’s canal stalls. The shop’s name blinked above the door, staining the crow’s pure white feathers with multicolored light.

“I never said I had a life-changing experience.”

“But that’s what you wanted, right? Some kind of relief? Some kind of explanation?” Friendly rested his hand over Donny’s on the table, but Donny pulled away. For a brief moment, Friendly stopped smiling. “It’s what everyone in the group wants, Donny. But what does The Book say about that?”

Donny looked down at his cup of jasmine tea, the little black grains at the bottom. Graciela said her mother taught her how to read the future with tea leaves. He wondered if she could read the past.

Friendly drank from his bowl, noticed that the tip of one of his shorter dreads had gotten into the soup, smiled at it like it was a pet, then cleaned it slowly with his paper napkin. As he did this, he recited from memory: “Part two, chapter 13, ‘The Futility of Blame.’ Our problems are of our own making. The synthetic aspects of our being merely symbolize our struggle. We have accepted the truth, that ultimately we have done this to ourselves, and that we can therefore hold no one outside ourselves responsible for the experiences in our lives.”

“She was crying . . . when she put me in the drone. She said she was sorry she forgot to make me tea. Then she said, ‘I only wanted to be touched one last time.’ What do you think that means?”

“What I think is irrelevant. Since you imagined it, you have to ask what it means to you, what your unconscious was trying to communicate. For example, I’ve noticed you don’t like to be touched.”

The old woman in a ragged kimono, who’d served them, came out from behind the curtain. She frowned, barked something in a language that wasn’t Japanese, went back to the kitchen. Her left arm was filthy white PVC that had been scavenged from a pre-synthetic public service unit. If you lost a limb and you could find an arm or a leg that fit, there were clinics that would wire the servos to a cheap control chip. It wasn’t illegal because nobody cared about the old vaguely human municipal robots. Do it with any version of a synthetic person, though, and the LAPD would make you disappear. Loach once told Donny about a black market synthetic body trade that was big money. But Loach liked to talk.

“What else did she say?” Friendly tipped back his soup, then set the bowl down, smiling as if Donny had just told the best joke ever.

“I don’t remember much. I was drugged. The Midnight Gladiolus—”

“Does not exist. There’s no such plant. There’s an Evening Gladiolus, which went extinct 137 years ago on all continents, but that’s all. I looked it up when you left me that crazy message.”

“I don’t know.” Donny squinted at his untouched tea. “I think I asked her if she’d always been the Cultivator. And she said that always is a long time.”

Friendly laughed, shook his head. “Listen to yourself, brother. You definitely need a sponsor.”

“As in, this noodle house? Yeah, I love this place.”

Friendly tilted the bowl and showed him the last fat noodle curled at the bottom. “Do you know why it’s called kitsune, Donny? Because it’s supposed to be the fox’s favorite food. Do you think that’s true?”

They looked at each other.

“I think we’re done here.” Donny stood and wouldn’t shake Friendly’s hand, which seemed to amuse Friendly as much as the prospect of noodles being named after foxes.

“Look, I’ll get you another copy of The Book. And Donny? Read it this time, okay?”

“Her name is Mera,” said Donny.