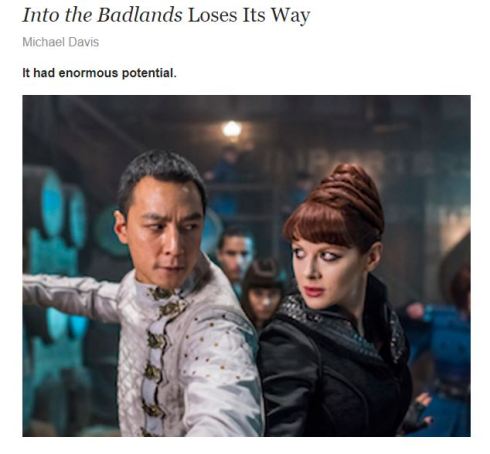 You Can Do Magic, Honey

A review of The Last Jedi on Splice Today.

Comments Off on You Can Do Magic, Honey   |  tags: Movies, review | posted in Movie Review, Movies

Review: a few belated thoughts on Game of Thrones, Season 5 (with many spoilers)

So I finally finished Season 5 of Game of Thrones and I know I should be emotionally manhandled at this point by all the cynical backstabbery, but I’m not. Martin Scorsese once said that it’s easy to get your audience to feel something—just put a puppy on stage and drop a safe on it. You’ll get the feels. Sadly (or happily), that doesn’t make for good drama.  Here’s my (I know, unsolicited) assessment with as many spoilers as possible now that the last episode has been out for a while. Look away now if you’re still planning on bingeing the season.  I haven’t felt compelled to write some kind of review since the second hobbit movie.  I know the world is probably better for it but Game of Thrones has had a special hobbity place in my heart ever since I watched the first season sick in bed in Bujumbura.  So here it goes.

The Artist Formerly Known as Theon: whatever. He has a Vader moment

and takes a leap off the battlements with Sanza, the girl with the same two alternating expressions since the beginning of the show. Okay. If the fall doesn’t make them both quadriplegics in Season 6, I’ll be rooting that they don’t get flayed and salted into Bolton jerky. That’s good, I guess. I have a hard time caring about what has happened to Theon’s manhood or Sanza’s happy thoughts.

Ramsay “Lecter” Bolton: everybody wants him to die horribly because he’s such a sadistic yet annoying formulaic psychopath. He has everything Nazi but the dueling scars and the monocle, even the black leather get-up. I think his best quality is the frozen maniacal grin that every Nazi doctor from Central Casting has had since Laurence Olivier did Dr. Christian Szell in Marathon Man. That was in 1976. I was 3 years old. And, believe me, I can appreciate the number of torture-obsessed Nazi doctors churned out by Hollywood since then.

If Iwan Rheon radiated just a bit more charm, he could star in some deflated prequel to Silence of the Lambs. His character’s personality has zero depth, which, ironically is realistic when we think about how stunted serial killers and mass murderers are said to be in real life. Still, real life should not intrude when it would make a character tedious. If we don’t want to dwell on the obvious Hannibal Lecter contrast, we can always recall Jeremy Irons as Claus von Bülow in Reversal of Fortune.  Claus is evil, yes, and we think he probably killed his wife.  Yet we just don’t care because the man has wit. Ramsay could use some wit, even just a little.

Stannis: he, however, gets 3 whole expressions: exasperation, bewilderment, and dread. And he doesn’t have to go through them sequentially anymore.  He burns his unrealistically angelic daughter, Shireen, at the stake because vampy evil stepmother Melisandre says the kid has to go. As soon as Davos gives Shireen the carved deer, we know the kid is done for. The whole arc is a sad case of writerly: look, I’m not pulling any punches here! I mean it! Nobody is safe! But if we don’t care about the characters—if they don’t have depth, if there is no redemptive vision at all—we’re in a 2D hellworld and everybody is worth exactly nothing. Sure, kill the kid if you want or drop a safe on the puppy. It’s all the same to us. This is hell, after all.

Jamie and Bronn: we know their expedition to Dorne isn’t going to end well. One good thing is that we keep expecting Bronn to be horribly eviscerated, stuffed with scorpions, and lit on fire by the end of their adventure, but all he gets is a sexy bite on the 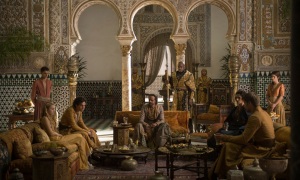 ear lobe. Otherwise, more backstabbery. In a country where everyone looks like Portuguese supermodels and dresses like medieval Turks, I guess you have to fall in love and someone is then required to put poison in your tea and you’re then fated to wake up in bed covered with snakes. Or something. You will still find the person who did it incredibly attractive.  One other thing is also certain: sweet and innocent daughters of noble houses die horribly. We know that already.

Arya Who Joined the Zen Death Circus: This has been my favorite plot strand. But by Episode 10, Arya has also gotten predictable. She was interesting for a long time—until she took revenge (oddly unsatisfying for all its gore) on demonically one-dimensional Sir Meryn. Faceless Assassin 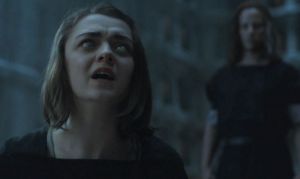 Master Po blinds her after some intentionally obscure Zen bullshit about “being no one.” All of it is a let-down because blinding is not what Arya needed. Transforming / revealing a new side to her character is what she needed. We all want her to either accept her new identity as a magical assassin or reject it and evolve into someone different. But we don’t get character change. We get Zen bullshit and Mission Impossible CGI masks. Disappointment—we get that, too.  I miss The Hound.  Bring back The Hound.  At least, he was funny.

Of Cersei, what is there to say? take one of the most beautiful actresses in the world; strip her down; and have a scene where she does the medieval walk of shame. It again works a la the safe and the puppy. Cersei’s hateful for most of the show up to this point (that’s 5 years of hate, people—think about it). So we’re meant to have mixed feelings about her “atonement.” And the whole scene has unintentional Monty Python potential. I don’t know. Lena 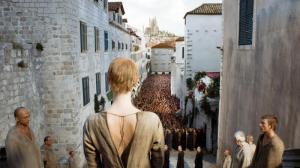 Headey can read the dictionary in a space suit and it wouldn’t matter. We’ll still watch and try not to blink. Bright sparkles will still be floating around her in the air. But I didn’t quite believe the walk of shame scene was authentic, which is to say organic, to her character development. I know that sort of thing really historically happened (doesn’t matter, this is King’s Landing not Earth). And I know the plot can (barely) support the scene (also doesn’t matter). I just don’t think Cersei—as we have come to know her—would submit like that. One of the reasons she’s so compelling is that she does have dimensionality to her character. She does have wit. She has strong emotions and uncompromising direct motivations. We want her to do something grand.  Instead, we are given nakedness and rotten fruit.  And it doesn’t enhance our insight into her.  It also doesn’t cause her to change.  She takes a lot of abuse and has revenge in her eyes by the time she gets back to the castle. Right.  But what else?

Lastly, Jon Snow really does know nothing: His is the only death I actually believe—surprising because it isn’t surprising at all. The Castle Black plot strand is, in my opinion, stronger than the others. I found myself wanting Alliser Thorne to remain the prick that we all feel he is. And I wasn’t let down at all. Still, I don’t really believe that

Jon Snow is actually dead. Maybe so. Maybe not. Of all the characters in the show, I care about him the most. I think this is because he has some redemptive qualities. He’s not just a resident sufferer in Hellworld. He’s trying to find and sustain some sense of justice. This is why I think we might be seeing him again in Season 6. Without him, Game of Thrones has no soul.